Congratulations to your 2021 Interdisciplinary Scholar Award from the Wu Tsai Neurosciences Institute, Ernie!

We are pleased to announce that Dr. Ernie Hwaun has been awarded with the 2021 Interdisciplinary Scholar Award from the Wu Tsai Neurosciences Institute. The promising young postdoctoral researchers of this Interdisciplinary Scholar Award come from the schools of Medicine, Engineering, Education and Humanities & Sciences, and stand out for their drive to challenge themselves and the traditional boundaries of their field. The postdoctoral Interdisciplinary Scholar Awards include a two-year fellowship, career development and funds for experiments or travel. The newest scholars join thirty previous fellowship recipients including alumni who have made important advances in the neurosciences and gone on to careers in academia, industry, nonprofit and government organizations.

Ernie Hwaun is currently a postdoctoral fellow in Dr. Soltesz Lab. Ernie received his Bachelor of Science in Physiology & Neuroscience and Master of Science in Biology from the University of California, San Diego. He then moved to the University of Texas at Austin to pursue PhD in Neuroscience. In his doctoral studies, Ernie investigated how rodents acquire memory of new locations during awake behaviors and subsequent sleep. As a postdoctoral researcher in the Soltesz lab at Stanford, he has been investigating the distinct roles of key inhibitory cell types in normal and abnormal circuit functions in mice. To explore whether neural mechanisms that support spatial memory in mammals also exist in invertebrates, Ernie has turned to octopuses, which possess the most advanced nervous system among invertebrates, with the ability to learn and navigate in open water. In collaboration with Prof. Zhenan Bao’s laboratory in the Department of Chemical Engineering, Ernie plans to employ new soft-material probes suitable to collect neural signals from behaving octopuses. With these new tools, he aims to gain insights into common fundamental neuronal mechanisms underlying spatial navigation in evolutionarily distant species living in markedly different natural environments.

END_OF_DOCUMENT_TOKEN_TO_BE_REPLACED

Transcriptional readout of neuronal activity via an engineered Ca2+-activated protease

END_OF_DOCUMENT_TOKEN_TO_BE_REPLACED

Mahad – Welcome to the Soltesz Lab!

Mahad is a medical student at Stanford. He graduated from the University of Washington with a B.S. in Neuroscience. He now plan to work with Dr. Farrell to investigate the role of the medial mamillary body in spatial cognition, as well as in the encoding and retrieval of memory. 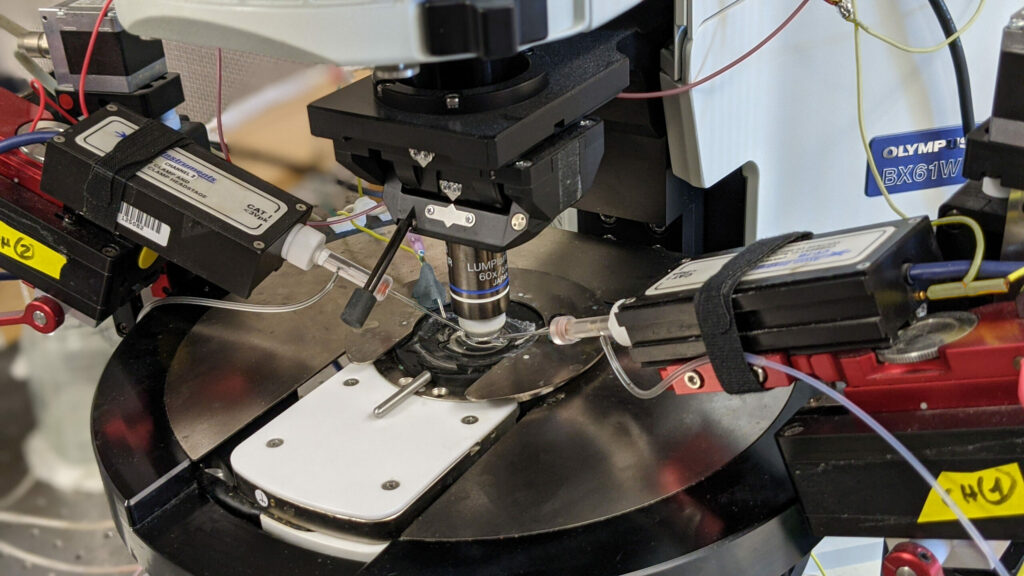 The brain is composed of a wide array of interconnected neurons, including both excitatory principal cells and a diverse assortment of regulatory interneurons. As neurons communicate through electrochemical mechanisms, characterizing the electrical signatures of both control and experimentally perturbed neurons provides great insight into the properties of the fundamental components that compose brain circuits.

With whole cell electrophysiology, we use finely pointed glass electrodes to precisely record the electrical signal from within individual neurons. Thus, we can examine both the functional electrical properties intrinsic to that particular cell and monitor the synaptic inputs that neuron receives. While recordings are often made from the neuronal cell body, the Soltesz lab has experience recording specifically from smaller structures, including hippocampal dendrites or even axonal terminals.

We also utilize several variants on the whole cell electrophysiology approach to interrogate other features of neuronal networks. We can apply compounds to manipulate neuronal activity either through bath application onto the entire brain slice, or through more targeted application via a microinjection system. Through paired patch-clamp recordings, we explore how two simultaneously recorded neurons (whether of the same or different cell types) are interconnected and how they influence the electrical properties of each other. We also employ optogenetic techniques to alter the activity of genetically targeted neuronal populations in response to light stimulation, both to examine their downstream connectivity and how they influence the electrical properties of other neurons. Furthermore, we have the capacity to combine whole cell electrophysiology with simultaneous high-speed imaging of optical probes (e.g. calcium and voltage indicators), enabling us to incorporate the high single cell precision of electrophysiology with broader population level readouts of activity within a brain slice.

Neurons recorded with whole cell electrophysiology can be filled with intracellular tracers, allowing enabling later morphological reconstruction of the cell. Subsequently, the labelled cell can be further stained for neurochemical markers with immunohistochemistry.

Below is an example of data from paired recordings of hippocampal interneuron (CB­1BC) signaling to pyramidal cells (PC), where CB1BC stimulation evoked inhibitory currents in the PC (panel A). The impact of a manipulation on CB1BC to PC signaling, in this case following proton irradiation (0.5 cGy) was then quantified (panel B). The morphology of the recorded neurons was then reconstructed (panel C). For further information, see Lee S-H et al., 2017, Brain Structure and Function. 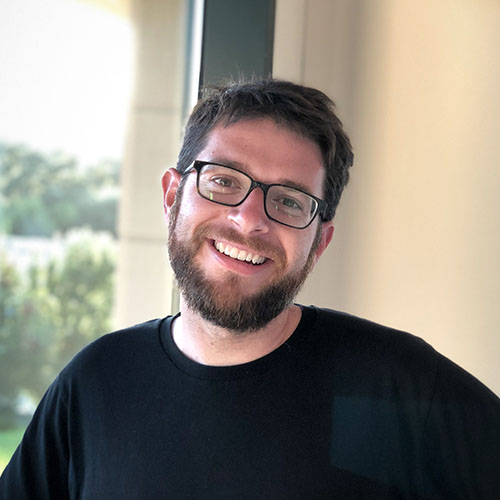 Peter completed his B.S. in Neuroscience at Bates College and his Ph.D. in Neuroscience with Dr. Mark Beenhakker at the University of Virginia. Since 2008, Peter has focused on investigating how neuronal network activity is perturbed in diseases such as epilepsy. After joining the Soltesz lab in 2018, Peter has been researching how the contributions of specific populations of hippocampal interneurons are altered in epilepsy using mostly in vitro electrophysiology approaches. He is also interested in how neuroimmune interactions contribute to modulating hippocampal excitability following seizures, irradiation, chemotherapy exposures, or other central nervous system insults.

END_OF_DOCUMENT_TOKEN_TO_BE_REPLACED

URee Chon has graduated with a B.S. in Biochemistry and Molecular Biology from Pennsylvania State University. As a first year rotating Neuroscience graduate student at Stanford, she is mentored by Dr. Nguyen in the Soltesz lab.